Review of The Darkening Age: The Christian Destruction of the Classical World by Catherine Nixey, pub. Macmillan 2017 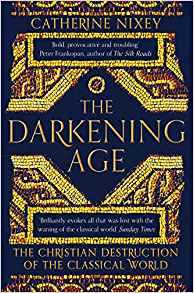 "The destroyers came from out of the desert. Palmyra must have been expecting them for years, a marauding band of black-robed zealots armed with little more than stones, iron bars and an iron sense of righteousness. […] The zealots roared with laughter as they smashed the "evil", "idolatrous" statues; the faithful jeered as they tore down temples, stripped roofs and defaced tombs. 'These shameful things', sang pilgrims proudly, 'our good Saviour trampled down all together.'"

Aye, those early Christians could be a right band of thugs, and vandalism was not the only disquieting resemblance they bore to Taliban or ISIL fanatics. They also craved martyrdom, to the extent that the church eventually had to discourage them from actively seeking it. One sympathises with the Roman governor of Asia, Arrius Antoninus, who got so exasperated by the queue of Christians at his door eagerly confessing their faith (which he would as soon not have known about) and demanding to be martyred, that he exclaimed "Oh you ghastly people, if you want to die so much, can't you throw yourselves off a cliff?"

Unfortunately they were also a danger to the lives of others. The story of Hypatia of Alexandria, torn to pieces by a mob for being a learned mathematician, is well known, but anyone who has read Philip Pullman's recent novel La Belle Sauvage and suspected him of drawing the long bow in his description of the League of Alexander should note John Chrysostom's recorded exhortations to the faithful to spy on and betray their friends and neighbours, not only for practising non-Christian worship but for sins like going to the theatre: "Let us be meddlesome and search out those who have fallen. Even if we must enter into the fallen one's home, let us not think twice about it."

Chrysostom, sounding even more like a Taliban sobersides than usual, rejoiced that "the tyranny of joy and the accursed festivals has been obliterated like smoke". Obliterating joy was something in which he and his kind took a suspicious pleasure: the exaltation of pointless pain and suffering (on the assumption that the more pain in this world, the less in the next) dates from this time. So does a poisonous distrust and resentment of learned people, even of learning itself ("Intellectual simplicity, or to put a less flattering name on it, ignorance, was widely celebrated"). This was partly what caused Hypatia's murder; the Christians of Alexandria, and the mobs they encouraged, had decided they had no time for experts.

This is a scholarly but readable history, in which people like the pagan philosophers Libanius and Damascius, adrift in times which have rejected and devalued all they have learned and believed in, come alive affectingly. One cannot but be moved by Damascius, finally leaving Athens when he is forbidden to teach, setting out in his seventies for somewhere he can go on being the person he has been all his life. And two quotations near the start sum up the theme rather neatly. On the one hand St Augustine: "That all superstition of pagans and heathens should be annihilated is what God wants, God commands, God proclaims." On the other, the pagan Symmachus: "We see the same stars, the sky is shared by all, the same world surrounds us. What does it matter what wisdom a person uses to seek for the truth?"
Collapse