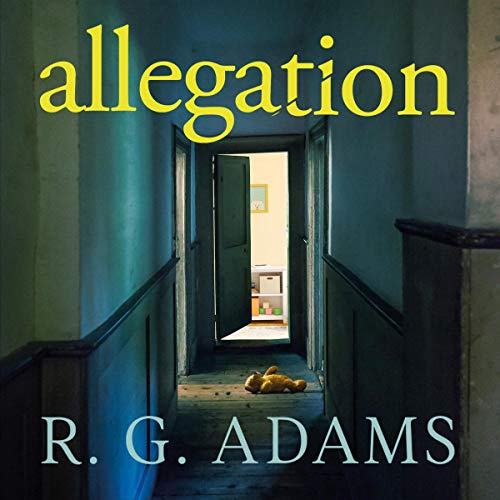 Kit, a young social worker, and Vernon, her mentor, are in a meeting with legal adviser Sue about a difficult case. Vernon, in his sixties, is getting a bit jaded with officialese:


"Vernon briefed Sue Sullivan while they waited for the Coopers to arrive. Kit handed her a copy of the proposed supervised contact agreement and she scanned it.
‘They’re going to want mother supervising contact. That’s going to be a major sticking point. Why don’t you trust her to do it?’
‘She’s arsey,’ Vernon replied.
‘Right. Or as we will perhaps put it, we don’t feel we can rely on her cooperation as yet.’
‘That’s it.’"

It is this kind of dialogue which tells you at once that you are listening to an author who knows whereof they speak.  Its easy assurance reminded me of Mike Thomas’s police procedural novels, and this novel is indeed also set in South Wales, but here for “police” read “social workers with special responsibility for childcare”.  Kit and Vernon spend their days trying to protect children, knowing that if they read one of their overload of cases wrong, they will be crucified by the press for either breaking up a family or failing a child.

Kit has been assigned a case that is really beyond her experience, because her department is understaffed and what staff there are, tend to burn out and go sick. A man has been accused of abusing two young girls over a decade ago. Since then, he has married and had three children, one of whom is the same age his accusers then were, hence the interest of social services. To make matters still more tricky, he and his family are educated, articulate middle-class with influential connections, not the sort to be overawed by authority.

I don’t think it’s any spoiler to say that from the outset it does look as if there is something not quite right about this family – the question is what, from whom it emanates and most of all, whether Kit can find any proof for it. Indeed, the alert reader may pick up some hints more quickly than Kit does, mainly because we do not have 15 similar cases to think about at the same time. Even then, though, we shall find our opinions of people constantly shifting, as hers do, and having to remember Vernon’s warning that nobody is all of a piece.

These salutary thoughts will not stop the reader occasionally yelling at Kit, “listen to X”, or “find out about Y”, because that is where much of the tension resides.  Kit is herself a survivor of a neglectful mother and a care home, and one of her siblings, Tyler, is still haunted by childhood events which Kit is trying to help him cope with. One thing that comes over very clearly from this novel is how easily an inexperienced, overworked person with worries of their own might miss, or misinterpret, something vital to a child’s welfare. It is significant, I think, that some of the most important things Kit finds out, both about this case and events in her brother’s past, she discovers by illicit, or at least not-approved-of, means - if she went wholly by the book, the ending would be very different.

This is a whodunnit, a did he dunnit, and if he dunnit, can they prove it? Which makes for a constant page-turner.  It is also a Bildungsroman for Kit, a likeable and credible character, but above all it is a testimony from a very hard place to work, by someone who quite clearly has been there, done that. Please don’t shy away because of the difficult nature of the material – the book, cannily, does not, in fact, dwell on harrowing aspects; it is enough to hint at them. There is humour, too, in Vernon’s battle with tidier souls who talk in management-speak and care more to protect their own backsides than anything else. But above all, there is this assurance, the feeling that we are listening to an author completely in control of their material, as we see from the first time Kit enters her open-plan office:


"The noise level was rising as dozens of phones rang and social workers rushed out on urgent visits, or in to make phone calls and get advice from their seniors. Impromptu meetings were going on all over the place: at desks, in corridors, in the coffee area and outside the toilets. Snippets of conversations reached Kit above the hubbub as she passed each team. One social worker was anxious about a teenager, a regular selfharmer who had gone missing from care over the weekend and had not yet turned up. In another team, the manager was trying to allocate the usual batch of domestic-violence referrals resulting from the weekend’s rugby-related drinking, her staff trying not to meet her eye. Wales had lost, Kit remembered, so no wonder they were reluctant to volunteer.

As Kit passed the Youth Justice Team, she spotted a young social worker sitting in silence with the phone to her ear, tears rolling down her face. Even from a few feet away, Kit could hear the furious shouting at the other end."