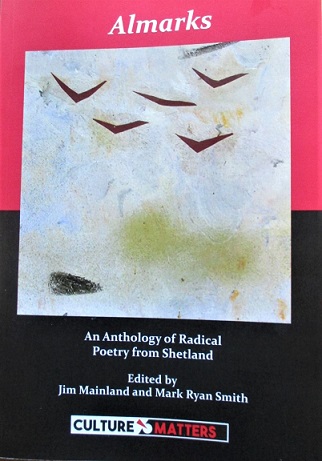 Off Skyros at midnight
The heads of the little drowned children
Gently knock against the hulls of the yachts. (Stuart Hannay)

This is an anthology of radical poems from living poets in Shetland, which at once raises the question of “what’s radical?” Jim Mainland’s introductory essay indicates that he takes it to refer both to subject matter and style.  This essay is a joy in itself; I shall treasure his demolition of the buzzword “virtue-signalling” - “surely the most linguistically flat-footed of insults – imagine Shakespeare coming up with something as weak as ‘take that, you virtue-signaller!’”.

It’s arguable that writing in dialect rather than “standard” English is itself radical, and not including  a glossary of dialect forms even more so. There are several poems in Shetlandic, and I found them accessible enough, but then I’ve been around the dialect for a while now. If you can follow Ola Swanson’s high-energy polemic on the locally controversial topic of windfarms, “Da Carbon Payback Kid’s Ill-wind Phantasmagoria”, you’ll be fine:

A wind-sooked inta-gridpooer guy gae me da wikiphysics
but I already hed a lingerin o it fae da Bridders Grimm.
Da whole rig set up a vibe an drave you gibberin ta money.

One thing that comes over as “radical” from this lively piece is how dialect can be employed on the most contemporary of themes, rather than being the preserve of folk song and nature poems. Laureen Johnson, in “March-past at Arromanches”, written after the 50th anniversary of D-Day (how time does fly), uses the dialect’s homeliness to cut through the pomp and ceremony:

But oh, in every waddered face
you see da eyes o boys.

And Beth Fullerton, harking back to a time when standard English was enforced in schools, feels an instant rapport with the poem “I Lost My Talk” by First Nations poet Rita Joe in Ottawa’s Museum of Nations. It’s possible that those whose native dialect is standard English will not appreciate fully the radicalism of “Tongue”, but Welsh, Scottish and Irish readers should have no bother:

Among the non-dialect poems, Raman Mundair’s “Let’s talk about a job” is memorable both for its subject matter (a job advert for an under-qualified, compliant doctor to work at an immigration detention facility in Louisiana) and its form, which is an unclassifiable but powerful melange of poetry, prose and drama. It’s also hard to quote from, because it uses a lot of repetition to build up a huge head of quiet but boiling anger. Its understated, matter-of-fact language is the antithesis of the ranting sometimes associated with “radical” poetry and far more effective. I would love to see it performed.

There’s only one poem by co-editor Jim Mainland, which is modest of him but a pity, I think, because he is in many ways one of the most radical writers in Shetland and any anthology of  contemporary radical Shetland poems that doesn’t include  his poem “Prestidigitator” has a serious lack.  There are also several images (I think mainly abstract paintings though some might be photos) by Michael Peterson, including the cover image reproduced here.

Declaration of interest: there are also three of mine here, but as usual I decided it was reasonable to review the rest of the anthology.

This being an anthology, the quality, as always, is variable. There are some pieces I like less than those above, and all readers will find that so – nor will the poems they like necessarily be the ones I like. But they should all find a lively, thought-provoking body of work from a great variety of artists. One radical aspect of this anthology is its inclusiveness: we have as many female writers as male, including a trans female writer, and though BAME voices are thin on the ground in Shetland, the most striking piece in the anthology is from an Indian-born Shetlander, Raman Mundair.  An almark, by the way, is a sheep that habitually breaks bounds. It’s a good word.